Skip to content
INTERVIEW / LAURA SPINNEY
A ROCKSTAR HEALTH MINISTER: Here below is an article that appeared this week in The Guardian, London, about the legendary offensive against Covid-19 by the Kerala Government headed by Chief Minister Pinarayi Vijayan, with his Health Minister KK Shailaja Teacher in the forefront of the no-holds-barred drive:
“ON 20 JANUARY, KK Shailaja phoned one of her medically trained deputies. She had read online about a dangerous new virus spreading in China. “Will it come to us?” she asked. “Definitely, Madam,” he replied. And so the health minister of the Indian state of Kerala began her preparations.
Four months later, Kerala has reported only 524 cases of Covid-19, four deaths and – according to Shailaja – no community transmission. The state has a population of about 35 million and a GDP per capita of only £2,200. By contrast, the UK (double the population, GDP per capita of £33,100) has reported more than 40,000 deaths, while the US (10 times the population, GDP per capita of £51,000) has reported more than 82,000 deaths; both countries have rampant community transmission. 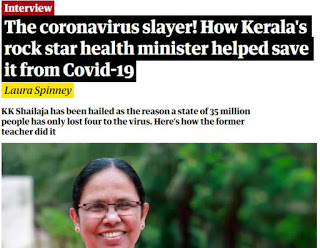 Places of worship were closed under the rules of lockdown, resulting in protests in some Indian states, but resistance has been noticeably absent in Kerala – in part, perhaps, because its chief minister, Pinarayi Vijayan, consulted with local faith leaders about the closures. Shailaja says Kerala’s high literacy level is another factor: “People understand why they must stay at home. You can explain it to them.”

The Indian government plans to lift the lockdown on 17 May (the date has been extended twice). After that, she predicts, there will be a huge influx of Malayalis to Kerala from the heavily infected Gulf region. “It will be a great challenge, but we are preparing for it,” she says. There are plans A, B and C, with plan C – the worst-case scenario – involving the requisitioning of hotels, hostels and conference centres to provide 165,000 beds. If they need more than 5,000 ventilators, they will struggle – although more are on order – but the real limiting factor will be manpower, especially when it comes to contact tracing. “We are training up schoolteachers,” Shailaja says.
Once the second wave has passed – if, indeed, there is a second wave – these teachers will return to schools. She hopes to do the same, eventually, because her ministerial term will finish with the state elections a year from now. Since she does not think the threat of Covid-19 will subside any time soon, what secret would she like to pass on to her successor? She laughs her infectious laugh, because the secret is no secret: “Proper planning.” “
CREDIT/COURTESY: The Guardian, UK
Republished with thanks; in public interest. –IHN-NN
INDIA HERE AND NOW www.indiahereandnow.comemail:indianow999@gmail.com