TVM: Congress Member of Parliament from Thiruvananthapuram, Shashi Tharoor, has praised the Kerala government for its efficient handling of the Covid situation and said Prime Minister Narendra Modi should have taken lessons from the state government.

“If only the Modi government were paying more attention to what’s been happening in Kerala, it would find India’s perfect model for how democracy should manage a pandemic,” Tharoor stated in a tweet, drawn from what he wrote for the Project Syndicate features service.

“Kerala was the first Indian state to report a case of COVID-19 – a medical student who had arrived from Wuhan, China, at the end of January. When Indian Prime Minister Narendra Modi announced a nationwide lockdown on March 24, Kerala had the most cases of any state. Yet today, it ranks low on the list of confirmed cases, and high on the list of COVID-19 recoveries. Moreover, the state’s fatality rate (0.53%) is the lowest in India, and it has managed to limit the spread of the virus without inflicting any of the human suffering seen in other parts of the country,” Tharoor wrote in the syndicated article, while mainly praising the state for its long-established systems in health care and social welfare. 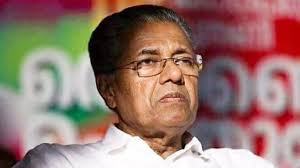 The Kerala government, principally chief minister Pinarayi Vijayan and home minister KK Shailaja Teacher have been drawing praise from within India and globally too for the systematic manner in which the state is handling the Covid situation. This, even as Kerala has extensive contacts and interactions with the outside world through its workforce as also students in various states as also abroad. Currently, there are large-scale arrivals from the Gulf and elsewhere by special flights carrying stranded and desperate Keralites who got stuck in the lockdowns in those countries. They are put through proper tests and led to quarantine facilities either at homes, accommodations rented by the government for the purpose or hospitals, as the case may be.

The Union civil aviation ministry started its special flights services after the paralysis of the aviation sector for several weeks by airlifting stranded people from Dubai and Abu Dhabi in the UAE to Kochi and Kozhikode airports in Kerala, as the state had readied facilities for their qarantine etc well in advance. Chief Minister Pinarayi Vijayan had said the state made arrangements to receive as high as three lakh returnees during the present Covid-hit season. 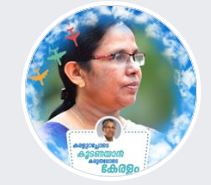 The daily evening routine of the chief minister holding a public address via TV channels to explain to the people about the day’s Covid spread position and the governmental regulations as and when new decisions are taken is drawing praise from all quarters.

Health Minister KK Shailaja Teacher has been of immense help to the CM, and vice versa, as she’s effectively coordinating the anti-Covid fight at the hospitals level. An earlier scenario of Nippah virus spread a year ago had also seen the minister soldiering the situation in a successful manner, and learning from the experience which helped her in the present fight. Shailaja is part of the CPIM’s firebrand Kannur region  leadership hectored by Vijayan for long years. The Kannur leaders, including state party secretary Kodiyeri Balakrishnan, now tamed by an illness, are an aggressive lot, though Shailaja is sauve in her manners and has endeared herself well to the state’s medical fraternity and the people across the board.

Shashi Tharoor’s praise of the Kerala government comes at a time when there are serious differences among the Congress rank and file in the state  over the state party leaders’ response to the Covid situation in the state. Some senior leaders are of the view that KPCC chief Mullappally Ramachandran and Opposition leader Ramesh Chennithala are embarrassing the Congress party by going on an unnecessary tangent against the Pinarayi government when it was seen to be doing a good job vis-a-vis Covid fight. — IHN-NN 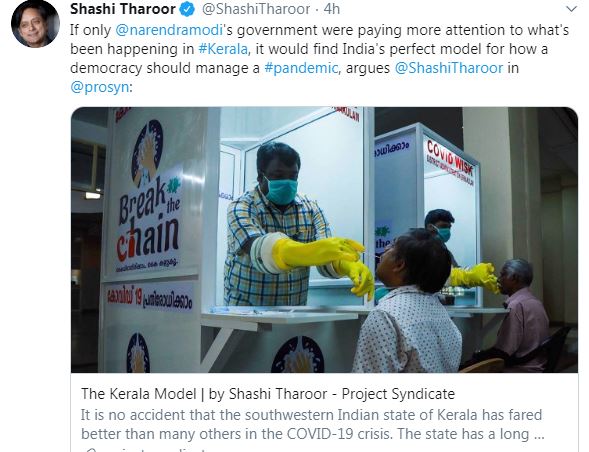