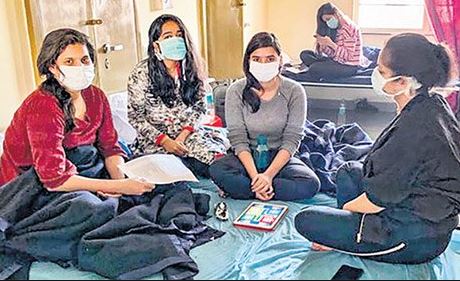 NEWS COVID INDIA
NEW DELHI: Indian Railways starts its passenger services, long-distance, from today after its long-drawn and abrupt suspension since March 25, when the nation was brought under a lock-down to combat the Corona virus threat. Bookings opened a day ago for some 15 special trains from Delhi to major cities in all directions. Some 55,000 passengers have done their bookings, as per latest railway figures. Regular schedules will not operate for more times to come.
Meanwhile, India’s covid count crossed the 70,000 mark by Tuesday, while death toll was put at nearer to 2,300 by the Union Health Ministry. Of this, some 3,600 infections were reported in the last 24 hours. The United States, world’s worst-hit, reported over 830 deaths on Monday.
Also, notably, 12 flights from abroad are airlifting stranded or distressed Indians from various cities abroad to airports across India in a continuing series, today. Commercial flights are expected to resume by next week. Flights are arriving from Dubai to Kannur and Mangalore, Muscat to Chennai, Singapore to Bengaluru and Kochi, Singapore to Delhi, Dammam to Kochi, Manila to Delhi and Ahmedabad, Dhaka to Srinagar, Kualalumpur, Newarc to Mumbai and Ahmedabad, and London to Hyderabad.
The railways said ticket bookings were done in a jiffy from 6pm on Monday. Bookings for the special train to Howrah closed within a matter of 10 minutes, through the railway computer network. The government is of the view that restoration of communication networks cannot wait any longer irrespective of whether or not the covid situation improved or not. Hotspots will altogether be avoided, but other regions would see relaxations eased progressively in the coming days.
The present lockdown period ends on May 17, and several states urged Prime Minister Modi in a video conference he held with chief ministers that time was still not ripe to welcome restoration of train services to their cities. Several other states welcomed the railways’ move, saying economic activities needed to restart at the earliest.
Among cities, Mumbai, Pune, Ahmedabad and Delhi badly hit by the Covid threat.There were also calls for central nod for restoration of bus services from some states.

Alongside, the Centre is restoring aviation services in a guarded and slow manner from destinations like London. It has already operated some Air India services as also Naval ships to lift stranded passengers from the Gulf and some other regions in the past few days. The railways, on its part, has introduced special trains to ferry migrant labour from various states to their hometowns in the past few days.
The Indian authorities, faced with a long-drawn lockdown and fight against Covid, is increasingly veering round to the view expressed by US president Donald Trump that economic activities cannot be allowed to suffer at the cost of a Covid fight. International rating agencies have predicted India’s GDP will fall to zero per cent from its 5.5 per cent growth position last year, due to the lockdown. China’s position is projected to fall further down to minus figures. –IHN-NN
INDIA HERE AND NOW www.indiahereandnow.comemail:indianow999@gmail.com