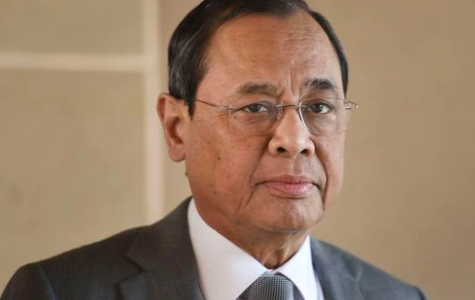 NEWS GOGOI
NEW DELHI: Former chief justice of India, Ranjan Gogoi, has been nominated to Rajya Sabha, the upper house of Parliament, by President Ram Nath Kovind. A notification to this effect was issued on Monday by the Union Home Affairs Ministry. It said, “In exercise of the powers conferred by sub-clause (a) of clause (1) of article 80 of the Constitution of India, read with clause (3) of that article, the President is pleased to nominate Shri Ranjan Gogoi to the Council of States to fill the vacancy caused due to the retirement of one of the nominated members.”
The 65-year-old Ranjan Gogoi was the 46th CJI, and the first to have reached the apex of the Supreme Court from the North-East region. He functioned in that capacity from October 2018 to November 2019. Gogoi adopted a conciliatory approach towards the executive, and did not embarrass the Modi government in any manner. A complaint from a woman court staff that he had behaved with her in an inappropriate manner had raised a media frenzy, but the matter eventually blew over.
There are those who say Gogoi maintained high integrity in an otherwise clean conduct as judge. IHN-NN
INDIA HERE AND NOW www.indiahereandnow.comemail:indianow999@gmail.com