Skip to content
NEWS BANKS MERGER
NEW DELHI: The merger of top 10 public sector banks – a vestige of the Indira Gandhi era — will take place soon. Many of these are heavily burdened with the problem of bad debts, also known as Non-Performing Assets. PSB’s total non-performing assets — mostly loans not repaid by those who have resources to pay back, but will not – are running in the range of Rs 8 lakh crore. Many of these willful defaulters, the likes of Vijay Mallya, have scooted from the scene and are living abroad, their cash deposited in tax havens.
Union Finance Minister Nirmala Sitharaman has made it clear the merger of the ten banks, in between them, will happen before April 1.

After the merger, only 12 PSBs will exist. The Union Cabinet is expected to give its nod for the merger soon, while the director boards of these banks have given the go-ahead. Prime Minister Narendra Modi reportedly held discussions on this matter with his cabinet colleagues this week, before the matter is presented for approval by the cabinet soon.
As per the plan, State Bank of India will remain as the top bank. SBI has a business of Rs 52 lakh crore.Oriental bank of Commerce and United Bank will be merged into Punjab National Bank, to turn PNB into the second biggest bank. It would have total business of the order of Rs 18 lakh crore.
Bank of Baroda, which had merged with Vijaya Bank and Dena Bank, will be the third top bank; these together have a business content of Rs 16 lakh crore. Syndicate Bank will be merged with Canara Bank. Together, the new bank will have a total business of Rs 15 lakh crore.
Union Bank of India, Andhra Bank and Corporation Bank will be merged into one. They will together have a business content of Rs 14.5 lakh crore.  Indian Bank and Allahabad Bank will be merged. Together, it will have a business of Rs 8 lakh crore. –
BANK NATIONALISATION
The bank nationalization took place in 1967, when Indira Gandhi was prime minister. With support from the Left, and in order to be seen as progressive and pro-people, she nationalized 14 private sector lending entities. The decision came after the Congress party fared poorly in the 1967 general elections. 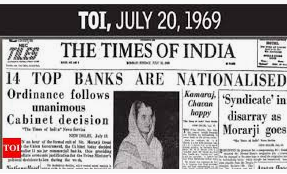 The war with China in 1962 and the war with Pakistan in 1965 had hurt the Indian economy badly, and public suffered. Bank Nationalisation was Indira Gandhi’s way to get out of the mess through populist policies and win back public support. Indira Gandhi told Parliament that her aim of bank nationalization was to promote rapid growth in agriculture, small industries and export, to encourage new entrepreneurs and to develop all backward areas.”
At the same time, she had foreseen the darker side of her bank nationalization. Stated she: “There will be autonomy for each bank and the boards will have well-defined powers. We will give directions but these will be on policy and general issues, not on specific loans to specific parties. We shall be vigilant about the dangers of too much interference—whether it is motivated by political or other considerations.”
Noting the above, Niranjan Rajadhyaksha of the Meghnad Academy of Economics adds in  a recent article: “The political control of bank lending continued even after the 1991 reforms. The bad loan mess that has weighed down on the Indian economy since 2012 is at least partly explained by the credit bubble that grew under political patronage from New Delhi. The fact that successive governments continue to maintain a tight grip on the banking sector shows the political importance of having control over the credit spigots in the economy…. Bank nationalization succeeded in specific areas such as financial deepening because of the rapid spread of branches, but it eventually did more harm than good.” ==IHN-NN
INDIA HERE AND NOW www.indiahereandnow.comemail:indianow999@gmail.com