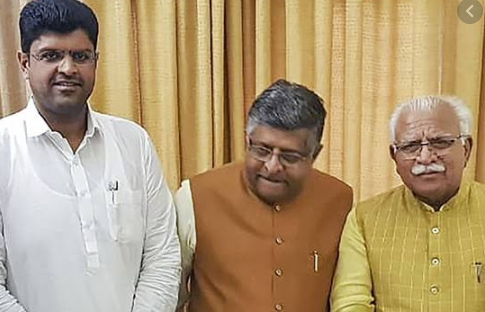 Dushyant Chautala, Union law minister Ravi Shankar Prasad and CM Manoharlal Khattar
NEWS HARYANA GOVT
NEW DELHI: A BJP-JJP government was sworn into office on Sunday, after an assembly election verdict that robbed the BJP of a comfortable majority in the state assembly. This is in contrast to the 2014 assembly polls, when the BJP won 46 of the 90 seats, nonetheless having a majority of its own.
The newly sprouted Jannayak Janta Party (JJP) headed by a young member of the well-heeled  Dushyant Chautala, got the deputy chief minister post and will act as a pressure group within the new governmental set-up. It has 10 MLAs in the new assembly.
For the BJP, the full freedom in running the government will be a thing of the past now. Some seven Independents too win back the new government, and they would be of some comfort to the BJP as of now, in warding off pressure from its junior partner in matters of governance.
The Chautala clan has been around in state politics for long years. Dushyant’s father Ajay Chautala (57) and his father and former CM Om Prakash Chautala(84) had been convicted in 2013 by a Delhi court vis-à-vis illegal recruitment of over 3,000 teachers and taking of bribe in this connection. The recruitment was done in year 2000.
Ajay has been granted furlough for three weeks in return for his “good conduct” in jail. He was released for the short duration a little before the swearing in of his son as deputy CM. Dushyant is the great grandson of former chief minister and Union minister Devi Lal.
Manoharalal Khattar, who served as CM for five years, is a former RSS pracharak and close to both PM Modi and the RSS leaders in Nagpur. –IHN-NN
INDIA HERE AND NOW www.indiahereandnow.comemail:indianow999@gmail.com