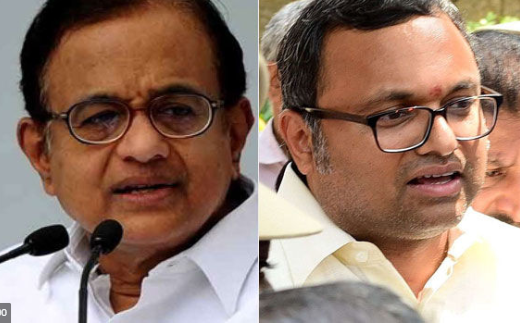 NEWS CHIDAMBARAM CBI
NEW DELHI: P Chidambaram as Union minister and his son Karti together took a bribe money of $5million (Rs 350crore) from promoter Indrani Mukerjea in the INX Media case, the CBI has stated in its charge-sheet presented before the special court trying the case this week. The INX Media bribe case is just one among the several accusations pending against Chidambaram and his son, who faced CBI and ED grilling in recent weeks while they were parked in Tihar Jail in this connection.
The bribe was collected through offshore payments in Singapore, Mauritius, Bermuda, the UK and Switzerland, CBI stated.
Indrani Mukerjea is currently jailed in Mumbai over the murder of her daughter Sheena Bora. She confessed to have paid the bribes, the CBI charge-sheet said. She told CBI that she met Chidambaram to discuss the modalities of illegal gratification between March/April 2007.
CBI chargesheet targets four companies and ten accused individuals under sections 120B (criminal conspiracy), 420 (cheating), 468 (forgery), 471 (signing a forged document as genuine) of IPC and Section 9 (taking gratification, for exercise of personal influence with public servant), 13(1)(d) (abusing one’s position as a public servant) of 13(2) (public servant who commits criminal misconduct) of Prevention of Corruption Act.
The four companies are INX Media Private Limited (currently 9X Media Private Limited), INX News Private Limited (Direct News), Chess Management Services Private Limited and Advantage Strategic Consulting Private Limited (ASCPL).
Some senior officials in the finance ministry are among those in the dock. They are Ajeet Kumar Dungdung, who was a section officer with the Foreign Investment Promotion Board (FIPB) at Ministry of Finance; Rabindra Prasad, then under-secretary at FIPB unit, Pradeep Kumar Bagga, then officer on special duty at Department of Economic Affairs, Prabodh Saxena, then director FIPB, Anup K Pujari, then Joint Secretary (Foreign Trade) Department of Economic Affairs, Sindhushree Khullar, then additional secretary, S Bhaskararaman, Chartered Accountant, and Peter Mukherjea, then director INX Media Limited.
CBI had registered the case in May 2017 after INX Media had received foreign investment Rs 403.07crore against an approved foreign direct investment (FDI) of Rs 4.62crore. The company illegally invested Rs 40.91crore in its sister concern INX News Pvt Limited from the received FDI amount without approval from FIPB in violation of provisions of Foreign Exchange Maintenance Act.
CBI said Indrani and Peter, directors of INX Media, allegedly entered into a criminal conspiracy with then finance minister P Chidambaram and his son Karti Chidambaram. Karti was then director of Chess Management Services Pvt Ltd and also with the then public servants of FIPB unit, Department of Economic Affairs for getting the issue settled without penal action against them. The penalty could have been upto three times the total amount received, and hence the settling of the matter through underhand deals, it is noted.
Karti had allegedly floated a front company, ASCPL, for receiving illegal payoffs in the guise of various consultancies. INX Media had also made a payment of Rs 9.96lakh into the account of ASCPL. This was seen as an illegal payment without delivery of any service, the CBI said. –IHN-NN
INDIA HERE AND NOW www.indiahereandnow.com email:indianow999@gmail.com