NEWS AFRICA MURALI
NEW DELHI: Close on the heels of a Latin American visit to take PM Modi’s message of bilateral cooperation with Argentina and other countries, the Union minister of state for external affairs V Muraleedharan is currently on a three-day African tour. The visit started on Wednesday and carried forward with a meeting of Cameroon prime minister Joseph N Gute.

This was the first ministerial level meeting between the two countries in the past three decades, Muraleedharan said.
The two sides took several decisions at the meeting based on plans formulated by External Affairs minister S Jaishankar. The Cameroon government highly appreciated the decision of the Indian government to set up an embassy at its state capital Yaounde. Both the nations committed themselves to close cooperation in fields like fighting terrorism. 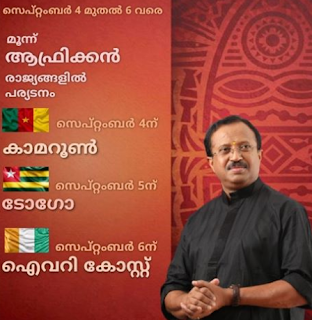 The Cameroon government side stated its intention to issue a postal stamp marking the 150-th birth anniversary of Mahatma Gandhi.