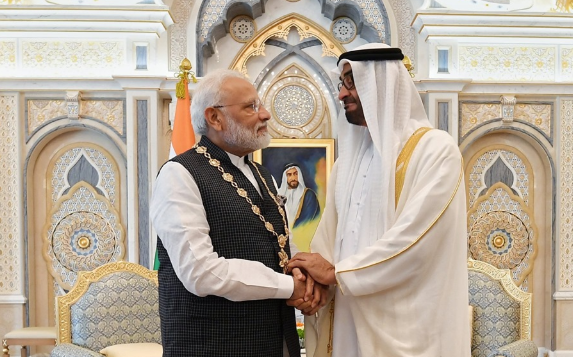 NEWS PM HONOURS
NEW DELHI: Islamic and Muslim-majority nations are honouring Prime Minister Narendra Modi with rare zeal, even as Modi is anathema to sections of Muslims back in India. The PM was hailed with the Order of the Zayed, the top civilian honour by the UAE last week. It was swiftly followed by Bahrain when Modi visited the second Gulf nation during his present foreign itinerary, which accorded him the Order of Renaissance award.

Modi had been awarded top honours by other nations in the past. In 2016 April, Modi received the King Abdul Aziz Sash award from the Saudi Arabian rulers. The same year, Modi received the Amir Amanulla Khan award from Afghanistan. This was followed by an award from Palestine in 2018, styled Grand Caller of the State of Palestine. Another award Modi won was the Nishan Izzuddeen Award from Maldives, the highest civilian honour of the island nation, in June this year.

Notably, the new honours come to PM Modi after he took a bold decision on Kashmir to abrogate Article 370, and ended the autonomy for what Pakistan claims to be a disputed territory. Kashmir remains all along with India, to which Raja Hari Singh handed it over shortly after Independence. Pakistan Prime Minister Imran Khan is piqued over the silence the Islamic nations are maintaining vis-a-vis developments in Kashmir, and stated a day ago that they were being selfish in not supporting Pakistan and siding with India in matters relating to a territory which is largely inhabited by Muslims.

The latest awards came also at a time when the Modi government ended the Triple Talaq system, a practice of instant divorce in Muslim community, which was putting large numbers of women and children in deep trouble.  IHN-NN