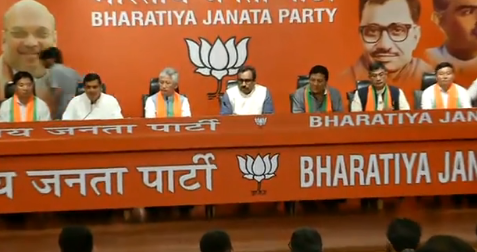 NEWS SIKKIM SDF BJP
NEW DELHI: In a major defection, 10 MLAs of the Sikkim Democratic Front (SDF) deserted the party and joined the BJP on Tuesday. This makes the BJP the main opposition party in the state where it had only one MLA. The SDF is now left with 3 legislators. The 10 were admitted to the party by BJP working president JP Nadda in the presence of BJP in-charge for north-east, Ram Madhav.
Notably, BJP is running governments in all other north-east states after having vanquished the principal power-wielder, the Congress party. While Madhav said the BJP will play the role of a constructive opposition in Sikkim, the stability of the Sikkim Krantikari Morch (SKM) government there is at serious stake. It faces no immediate threat, though. SDF has 17 legislators.
The SDF had got 15 seats in the last assembly polls, but two of these MLAs had won from two seats each and hence quit one each seat. This meant the SDF strength got reduced to 13 in the 32-member state assembly. The state is now set for bypolls to three seats. The large-scale resignation from SDF meant these 10 defected MLAs will not be disqualified. –IHN-NN
INDIA HERE AND NOW www.indiahereandnow.comemail:indianow999@gmail.com