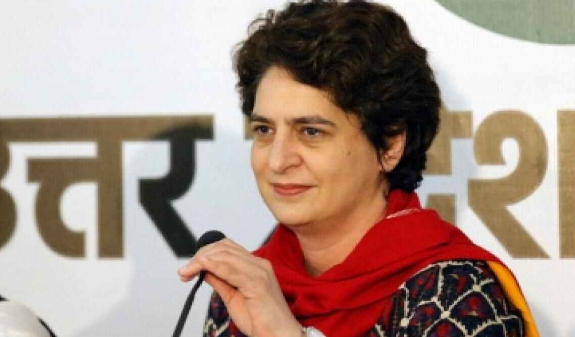 NEWS PRIYANKA
NEW DELHI: In a big relief to the grand old party and its rank and file, there is convergence of opinion in the Congress as to who the next party president should be. Opinions collected by the central party leadership through various channels have thrown up the name of Priyanka Gandhi.
Rahul Gandhi had been given a chance to revive the fortunes of the party, and he could not do much despite his best efforts. This was amply proven in the Lok Sabha poll results. The next choice for the party chief should be none other than Priyanka Gandhi Vadra, as she has charisma, the family tag and above all a better connect with the masses across India. This is the dominant mood in the party now, as is amply projected also by Shashi Tharoor MP and Punjab strongman Captain Amarinder Singh. Both have been rooting for a young leader to take up the leadership of the party if Rahul Gandhi would not change his mind.
The loss of power in Karnataka has come as the last straw on the ailing camel’s back. Perceptions are that the scenario progressively worsened there in the past three weeks and there was not enough of fire-fighting to stem the rot and keep the Congress legislators together in the face of suspected attempts from the BJP side to encourage defections. The JDS-Congress government fell, unsung, and the BJP has managed to grab power in the state.
Priyanka Gandhi has given every hint to party leaders in recent days that she would not shy away from responsibility. At the same time, she openly stated that she did not want to be the Congress chief. This seemed to be a clever game.
Perceptions are that Priyanka did not want to give an impression that she grabbed the chair from her brother. She would rather want the world to know that the leadership was thrust on her as a last resort.
Rahul Gandhi announced his exit from the Congress president post on May 25, two days after the LS poll results were out and the Congress faced disaster for the second time in a row. At that time, he had openly expressed his objection to drawing in another member of the family into the debate for the next president. “Do not drag my sister’s name into this,” he had said in a protective tone. This silenced Priyanka and Sonia Gandhi for a while, though not for long-term. Sonia Gandhi started weighing the pros and cons of introducing Priyanka as the best bet against the marauding saffron force of Narendra Modi and Amit Shah, with strong RSS support.

This week would be crucial for the Congress. There is consensus in favour of Priyanka Gandhi. Almost everyone in the party is convinced that she alone can save the party from disaster at this point of time. Several names had been floated in recent weeks as likely successor to Rahul Gandhi at the head of the party. But, no name impressed Congressmen across the board. Oldies were laughed out of court. Even youngsters like Sachin Pilot, Jyotiraditya Scindia and Mukul Wasnik did not impress those outside their states. Even within the respective states too, support was coming only from sections of the Congressmen. By contrast, there was a full-throated welcome for Priyanka from all states. This was what Sonia Gandhi, in specific, was waiting for.

In fact, all names were circulated for the heck of it — and with full  knowledge that Congressmen would not back any of the non-Nehru family names. The powerful Brahmin lobby in the party, whose words count most, too wanted to ensure that the leadership rested with the Nehru family, a source said.
Priyanka could be the ultimate trump card for the party. The matter would be discussed among Congress Working Committee members this week. Rahul Gandhi too is likely to be persuaded to endorse Priyanka’s name, after which an announcement is expected. –IHN-NN
INDIA HERE AND NOW www.indiahereandnow.com email:indianow999@gmail.com