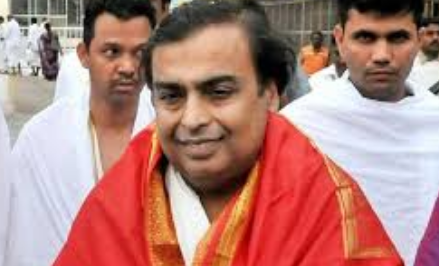 NEWS MUKESH SALARY
MUMBAI: Richest Indian Mukesh Ambani, who is world’s 13th richest individual who heads the Reliance Industries, has kept his annual salary from the company at Rs 15crore without a raise for the 11th consecutive year this last fiscal. He had fixed this amount as his annual salary without change since the 2008-09 fiscal. As a result, he waived Rs 24crore every year which was his due.

A report noted on Saturday that, meanwhile, the remunerations of all whole-time directors of the company, including cousins Nikhil Meswani and Hital Meswani, saw a handsome increase in the fiscal year ended March 31, 2019. “Compensation of Shri Mukesh D Ambani, Chairman and Managing Director, has been set at Rs15 crore, reflecting his desire to continue to set a personal example for moderation in managerial compensation levels,” RIL said in its latest annual report.

Mukesh Ambani’s remuneration for 2018-19 included Rs 4.45crore as salary and allowances. This was marginally lower than Rs 4.49crore he got in the previous 2017-18 fiscal. Commission has been unchanged at Rs 9.53crore while perquisites have risen to Rs 31 lakh from Rs27 lakh. Retirement benefits were Rs 71 lakh.
The sixty-two year-old Ambani voluntarily capped his compensation at Rs15crore in October 2009 amid a debate over right-sizing of CEO salaries. The salary cap continued even as all other executive directors saw their remunerations go up. Ambani’s cousins Nikhil R Meswani and Hital R Meswani saw their compensation rise to Rs20.57crore each. They earned Rs19.99crore each in 2017-18 and Rs16.58crore in 2016-17. In 2015-16, Nikhil had got Rs 14.42crore while Hital took home Rs14.41crore. In 2014-15, they had got Rs12.03crore each.

Also, one of his key executives, executive direvtor Panda Madhusudana Siva Prasad saw his remuneration go up to Rs 10.01crore from Rs 8.99crore the previous fiscal. He too has seen his remuneration rise steadily — from Rs 6.03crore in 2o140-15 to Rs 7.23crore in the next fiscal; and, Rs 7.87crore 2016-17. Prasad hails from Guntur in Andhra Pradesh and is with the Reliance since the early 1980s under founder Dirubhai Ambani.
Refinery chief Pawan Kumar Kapil saw his compensation rise to Rs4.17crore from Rs 3.47crore in 2017-18. In the previous fiscal, his remuneration had fallen to Rs 2.54crore, from Rs 2.94crore in 2015-16. He had earned Rs 2.41crore in 2014-15. The two however did not get any commission in 2018-19.
RIL annual report noted: “Performance criteria for two Executive Directors, entitled for Performance Linked Incentive (PLI), are determined by the Human Resources, Nomination and Remuneration Committee.” RIL’s non-executive directors, including Nita Ambani, also got Rs 1.65crore each  as commission,  besides sitting fees. The commission was Rs 1.5crore in 2017-18 and Rs 1.3crore the previous year.
The report also said former State Bank of India (SBI) chairman Arundhati Bhattacharya got only Rs 75lakh as commission as she was appointed to the board of RIL only with effect from October 17, 2018. –Agencies, IHN-NN
INDIA HERE AND NOW www.indiahereandnow.comemail:indianow999@gmail.com