NEW DELHI: The representation of backward communities in central government departments has improved over the past several years, the Parliament has heard. “As per information received from 78 departments, the representation of SCs, STs and OBCs in the services under the central government, as on January 1, 2016, was 17.49 per cent, 8.47 per cent and 21.57 per cent respectively,” Union minister Jitendra Singh said in a written reply in the lower house of parliament.
The minister, who is attached to the PMO and holds the portfolio of the Personnel, Public Grievances and Pensions admitted that there is huge backlog of unfilled vacancies for reserved categories like BCs in 10 top departments which employ maximum number of staff, like public sector undertakings, banks etc.
Dr Singh said the Department of Personnel and Training (DoPT) has issued instructions to all ministries and departments to constitute in-house committees to identify backlog reserved vacancies. He did not say whether the vacancies would be filled.
He said the representation of SCs and STs was more than the prescribed reservations, namely 15 per cent and 7.5 per cent respectively. The representation of OBCs in the central government services is 21.57 per cent, which is less, as compared to the prescribed percentage of reservation for them,” he admitted.
“Reservation of Other Backward Classes (OBC) has shown an increasing trend since it started in September, 1993. As per available information, representation of OBCs, as on 1.1.2012, was 16.55 per cent, which has increased to 21.57 per cent, as on 01.01.2016,” he said.
Ten ministries, out of the 78 which had submitted the data on the reserved categories, had more than 25,000 backlog reserved vacancies as on January 2017. Five out of those 10 ministries had filled more than 57 per cent of the vacancies till December 2017. As on January 2018, 43 per cent, which formed 9,165 backlog reserved vacancies, existed in these five ministries.
The 10 ministries/ departments cited by Dr Singh have more than 90 per cent of the employees in central government including public sector banks/ financial institutions, central public sector undertakings etc. –IHN-NN

THE FOLLOWING IS THE LIST OF MAXIMUM RESERVATIONS ALLOWED UNDER LAW TO VARIOUS CATEGORIES. 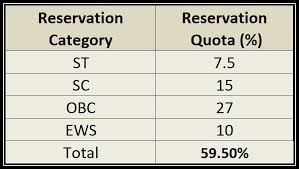