NEWS SARAVANA
CHENNAI: P Rajagopal, 0wner of popular South Indian restaurant group Saravana Bhavan, died on Thursday at a hospital here, where he had been admitted on July 9 for treatment. Rajagopal had been convicted in a case of murder of his employee Santhakumar with the alleged intent of marrying his wife, Jeeva Jyothi. His prolonged bail had recently been cancelled by the Supreme Court, which asked him to surrender. 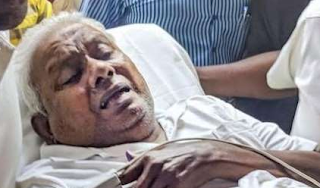 With oxygen mask et al, Rajagopal had reached the Madras High Court in an ambulance to effect the surrender, on July 9, but quickly obtained a transfer from jail to a hospital for treatment. It was on July 7 that Rajagopal’s plea for extension of his bail was rejected by the Supreme Court. He had several bail extensions after his conviction in 2004. He has been on bail since 2009.
During the hearing of the case around year 2000, lawyers had told the court that the murder was done as Rajagopal got advice from astrologers that marrying Jeeva Jyothi, his employee Ramaswamy’s daughter, would boost his business prospects. The girl’s family rejected the marriage plea, and she was later married to Santhakumar, another of Rajagopal’s employee, in 1999. In year 2001, the couple complained to police that there was a threat to their life from Rajagopal. Within two days, Santhakumar’s body, after an abduction, was recovered from the forests in Kodaikanal.
Rajagopal hailed from a backward community, who made a big success in a field where Brahmins held sway all along — running of vegetarian restaurants.

He had great faith in Astrology, which apparently led him to the murder with a view to marrying Jeva Jyothi, even though he was already married twice.
Rajagopal was running a small provision store in KK Nagar when his astrologer advised him to shift his trade to a field involving Agni (fire and flames). First, he started a restaurant called Kamachi Bhavan. It did not click much. The astrologer then told him to change the name to Saravana Bhavan. Today, Saravana Bhavan has restaurants in 27 countries across the globe, including in Europe and the US, besides some 25 restaurants in India. It was some 20 years ago that the astrologer advised Rajagopal to marry Jeeva Jyothi.
The Saravana Bhavan group will likely be led from now by his son R Saravanan. IHN-NN
INDIA HERE AND NOW www.indiahereandnow.com  email:indianow999@gmail.com