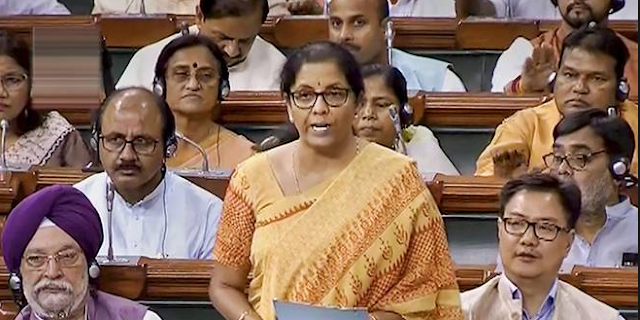 NEWS PARLIAMENT ECONOMIC SURVEY
NEW DELHI: The Union Government has tabled the economic survey report in Parliament. It predicts 7 percent GDP growth in financial year 2019-20, on stable macro-economic conditions. It stresses India is the fastest-growing economy. The report was presented by Union finance minister Nirmala Sitharaman. The Union Budget will be presented by her tomorrow, Friday.

GDP growth has averaged a high of 7.5 per cent in the last five years. India needs to grow at 8 percent per annum to become a $5 trillion economy by FY25, the report notes.

SCHOOLS, GIRLS: Over the years, remarkable progress has been made in respect of female participation up-to secondary level and Gross Enrollment Rate for girls has exceeded that of boys. But girls’ enrolment rate is lower than that of boys at the higher education level. At this level, the gap is visible across the social categories too.

HDI: As per the UNDP Human Development Index (HDI), India is ranked 130 among 189 countries.

FOREIGN EXCHANGE: India’s foreign exchange reserves continue to be comfortably placed at US$ 422.2 billion, as on 14th June 2019

AGRI PRODUCTION: Farmers may have produced less in FY19 on food price fall.

SCHOOLS: The Pupil Teacher Ratio (PTR) at national level for primary schools is 23, 17 for upper primary, 27 for secondary and 37 for senior secondary schools. While the PTR appears to be satisfactory, it is clear that while there are sufficient teachers, the main issue is their balanced deployment based on student strength.

UDAN: UDAN has provided connectivity to 23 unserved airports out of the aim to operationalize 100 by the year 2026-27.

CLEAN GANGA: National mission to clean Ganga: 143 ghats have been taken up under the Mission out of which 100 have been completed. The massive afforestation drive undertaken in the five Ganga States has led to increase in forested area of 8,631 hectares. The organic pollution load on the river has decreased from 263 kg/MLD in 2011-12 to 65.24 kg/MLD in 2018-19. –IHN-NN