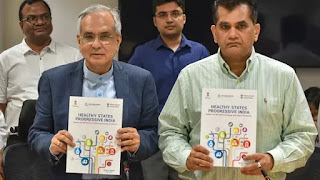 NEW DELHI: The southern state of Kerala has, in a repeated honour,  topped the NITI Aayog’s ranking of Healthy States while, predictably, Bihar and Uttar Pradesh have emerged as the worst performing states. The “Healthy States, Progressive India” report released by NITI Aayog Vice Chairman Dr Rajiv Kumar and CEO Amitabh Kant this week listed Haryana, Jharkhand and Assam as the states which have improved the most, compared to the previous term.
Dr Rajiv Kumar said the list was prepared in collaboration with the Ministry of Health and Family Welfare (MoHFW), with technical assistance drawn from the World Bank.
LIST OF STATES in their order of ranking, starting with first: Kerala, Andhra Pradesh , Maharashtra, Gujarat, Punjab, Himachal Pradesh, Jammu and Kashmir, Karnataka , Tamil Nadu, Telangana, West Bengal, Haryana, Chhattisgarh, Jharkhand, Assam, Rajasthan,  Uttarakhand, Madhya Pradesh, Odisha, Bihar and Uttar Pradesh.
The first round of the Health Index (referred to as 2017 Health Index) was released in February 2018. It measured the annual and incremental performance of the States and UTs over the period of 2014-15 (base year) to 2015-16 (reference year).
The second edition of the report released on Tuesday focuses on measuring and highlighting the overall performance and incremental improvement of the states over a two-year period (2016-17 and 2017-18). The report takes into consideration the health outcomes, governance and processes and impact of policy interventions.  –AGENCIES, IHN-NN