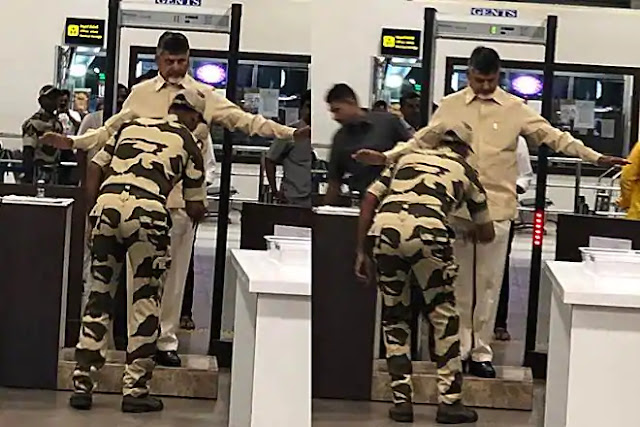 VIJAYAWADA: Former Andhra Pradesh chief minister Chandrababu Naidu was treated like a normal citizen — in contrast to the VVIP tag that he enjoyed in the past — at the airport here on Friday. He was frisked by security personnel and made to travel by bus from the airport building to the plane along the tarmac, much unlike the previous times when his vehicle was allowed in through the tarmac to reach the planes he was scheduled to fly.

Naidu was returning to Hyderabad from here after attending a meeting of the Telugu Desam party, to review the party’s disastrous electoral performance in both the assembly and Lok Sabha polls, which were held simultaneously. Naidu’s son Nara Lokesh was among those humbled in the fight at the hustings in what was considered to be a fortress of the TDP. YSRC stole the wind out of TDP’s sails, leading to the installation of a government headed by Jaganmohan Reddy as chief minister.

The ruling Telugu Desam has registered its protest and said the BJP and the YSCR of chief minister Jaganmohan Reddy were treating Naidu in an unfair manner. The party spokesman pointed out that Naidu has Z class security in view of the Maoist threats against him. Recently two vehicles from his security convoy had been withdrawn much to the distress of Naidu.

Naidu is paying a price for his unwarranted indulgences. Instead of caring for his state’s problems, Naidu was jet-set repeatedly flying to Delhi and state capitals including Kolkata in recent times, to ramp up support for an anti-Modi, anti-BJP opposition alliance. All his efforts went in vain as PM Modi and the BJP staged a dramatic come-back to power after the Lok Sabha polls.

Naidu and his Telugu Desam party were previously with the BJP-led NDA, but broke off on various issues, including the Centre’s refusal to grant Andhra Pradesh the status of a Special Category State. PM Modi insisted that there would be no more special category states, as the problems of backward states would be attended to by the Niti Aayog, which replaced the old Planning Commission. IHN-NN