BISHKEK, Kyrgyzstan: Prime Minister Narendra Modi had a brief exchange of pleasantries on Day-Two of the Shanghai Cooperation Organisation (SCO) summit here. It was informal and brief in nature, while the leaders attending the meet were at the lounge, and Imran Khan congratulated Modi on his return to power after the polls.

On the first day of the summit, the two leaders had avoided each other.

At the summit, the Indian PM called for a joint fight against terror, and said nations that supported or funded terror outfits should be held accountable for such acts. The Prime Minister did not mention any nation by name, but the reference obviously was to Pakistan.

PM Modi, who arrived here on Thursday for the eight-nation summit, held an informal meeting with Chinese President Xi Jinping and held out an invitation to him to visit India. Xi promptly accepted the invitation. Xi had visited India a short while after Modi took over as Prime Minister for the first time in 2014, and the two had spent valuable time in the PM’s home-state of Gujarat.
In discussions on Pakistan, to which China maintains close bilateral and economic relations, the PM made it clear to Xi India was for peaceful co-existence. The dialogue process between India and Pakistan was suspended in the aftermath of a terrorist attack on the Pathankot Air Base attack by terrorists who landed up there from Pakistan. India made it clear that terrorism and talks would not go together, and hence the standoff, the Indian PM told Xi.
Modi also told Xi that Pakistan was not doing enough to check Pakistan-based outfits engaged in acts of terror on Indian soil. Later in the day, Xi was to have a meeting with Pakistan prime minister Imran Khan, who is also attending the SCO summit. 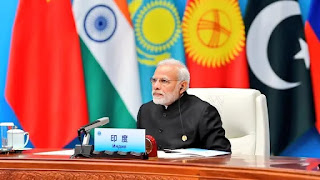 Tweeted PM Modi after his meeting with Xi: “Had an extremely fruitful meeting with President Xi Jinping. Our talks included the full spectrum of India-China relations. We shall continue working together to improve economic and cultural ties between our nations.”

The Prime Minister also met President Vladimir Putin of Russia on the sidelines of the SCO meet, and then tweeted: “The meeting with President Putin was excellent. We had wide-ranging discussions on ways to further boost the India-Russia strategic relationship.” –IHN-NN