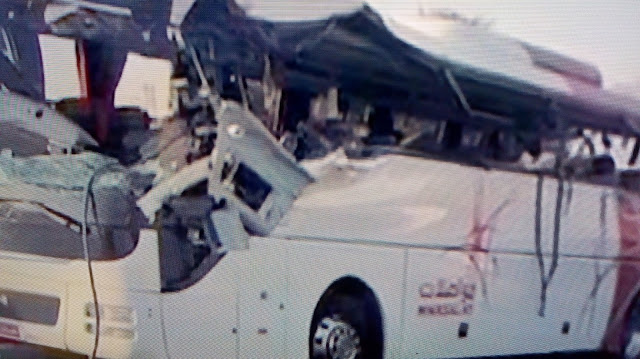 DUBAI, UAE: At least eight Indians were among 17 persons killed as a bus from Oman hit an overhead height restriction mechanism on Thursday evening. Many were injured too. Several Malayalees were among the dead and injured.
The dead were Rajagopalan, Feroz Khan Pathan, Reshma Feroz, Deepak Kumar, Jamaludeen Arakkaveettil, Kiran Johny, Vasudev and Tilakram Jawahar Thakur, the Indian Consulate here said while releasing information based on latest inputs. More deaths were likely.
“We are sorry to inform that as per local authorities and relatives it is so far confirmed that 8 Indians have passed away in Dubai bus accident. Consulate is in touch with relatives of some of the deceased & awaits further details for others to inform their families,” the consulate said on Twitter.
The bus was owned and run by Mwasalat, a government-owned bus company in Oman. The mishap happened at around 6pm on Thursday on Sheikh Mohammed bin Zayed Road. –Agencies, IHN-NN
INDIA HERE AND NOW http://www.indiahereandnow.com email:indianow999@gmail.com
INDIA HERE AND NOW http://www.indiahereandnow.com email:indianow999@gmail.com