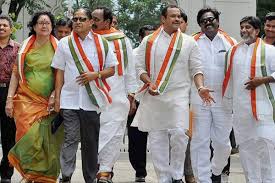 HYDERABAD: The down-and-out Congress party, nursing the wounds of an election defeat in the parliament polls, received a jolt here on Thursday when 12 of the total 18 Congress MLAs joined the ruling Telangana Rashtra Samithi (TRS) headed by Telangana chief minister K Chandrshekar Rao.
The Congress party’s alliance with Chandrababu Naidu’s Telugu Desam Party (TDP) in the recent state assembly polls in Telangana was of little help to revive its fortunes. Speaker P Srinivas Reddy accepted their plea to shift sides, as anti-defection law allows floor-crossing if two-thirds of a party’s MLAs so desired. As a result, the Congress lost its opposition party status in the assembly. The AIMM of Assaduddin Owaisi has seven members, which is backing the government.
While the Telugu Desam Party had won two seats in the assembly polls, one of them decided to switch over to the TRS. With the result, there is no opposition as such to the TRS government.
The Congress MLAs’ defection was a calculated move. It was a short while ago that state Congress president Uttam Kumar Reddy quit his assembly seat following his election as MP this time. From 19, the Congress tally in the assembly got reduced to 18.
In fact, TRS did this in the past two. After AP bifurcation and Telangana state formation, the first assembly polls were held in 2014. TRS won a majority, but its founder and newly installed chief minister swiftly encouraged 12 of the 15 TDP members to join his party.
The Congress had won three LS seats this time in Telangana, against two in 2014. TRS won 9 seats and BJP four. –IHN-NN
INDIA HERE AND NOW www.indiahereandnow.comemail:indianow999@gmail.com