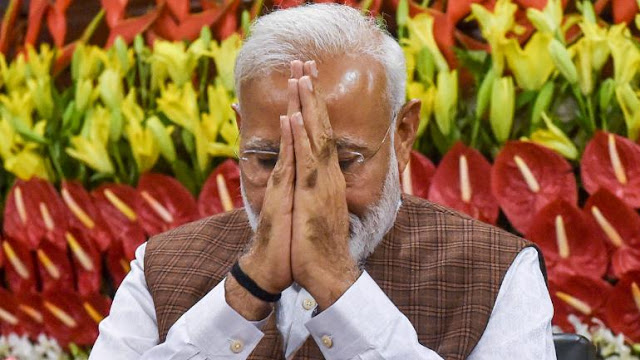 NEW DELHI: Prime Minister Narendra Modi will be sworn in as Prime Minister for a second term on Thursday evening at an event at Rashtrapati Bhavan which will see the presence of over 6,000 invitees. Indication are that several of the ministers in the previous ministry will return to the new ministry. A notable exception is Arun Jaitley, who was finance minister in the first Modi government.

PM Modi will be holding a tea party Thursday morning for those whose names have been included in the list of the new council of ministers.

Arun Jaitley sent a letter to the PM in the morning, saying he would stand aside this time in view of his bad health. PM Modi drove to Jaitley’s residence at 2 Krishna Menon Marg, for confabulations with the senior leader who was a tower of strength for Modi in the past five years. Jaitley was among the few leaders in the BJP who first pushed a proposal to field Modi as PM nominee. This led to the Goa conclave of the BJP, at which RSS pushed Modi’s case much to the chargin of leaders like LK Advani and Murli Manmohar Joshi and even Sushma Swaraj.

No hints came about the new ministry from Amit Shah, though he held discussions with senior party leaders for much of the day and night Wednesday. In the game of speculations, several names were taking the rounds.

Several leaders from neighbouring countries are attending the swearing in ceremony, with the exception of Pakistan and China. Over 40 families from West Bengal, who were at the receiving end of political violence at the hands of the Trinamool Congress, are among the special invitees for the PM’s swearing in. Chief minister Mamata Banerjee backtracked on her decision to attend the ceremony, by taking serious objection to the invites sent to these families. Meanwhile, one more MLA from Trinamool Congress left the TMC and joined the BJP on Wednesday, and more MLAs are expected to follow suit later this week.

Reports said Kerala chief minister Pinarayi Vijayan has been advised by his party’s central leadership to keep off the swearing in ceremony. Congress leaders Sonia Gandhi, Dr Manmohan Singh and Rahul Gandhi have confirmed their presence at the event. IHN-NN