NEWS MODI CABINET
NEW DELHI: A big push is on for ministerial berths from coalition parners of the BJP. Shiv Sena chief Uddhav Thackeray was here on Saturday with a shawl to hail PM Modi and to take matters forward. It had at one time tried to act as kingmaker in Delhi after the polls – to push Nitin Gadkari’s case if the BJP did not win a majority on its own.
With the BJP winning more than 300 seats at the height of what is seen to be a saffron wave unleashed by PM Modi, the Shiv Sena has decided to play the role of a good boy before Modi and Amit Shah. Modi, who has a record of keeping alliance partners under check, unlike the Manmohan days, cannot be dictated to in any manner under the present conditions of heightened electoral support and seat strength behind him. Yet, he is willing to give a hearing. 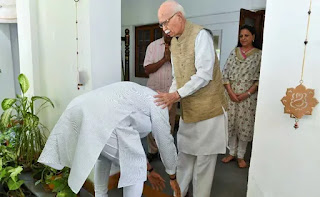 The Prime Minister is preparing the ground for formation of the new ministry. To start with, the niceties. He along with party chief Amit Shah held meetings with party veterans Lal Krishna Advani and Murli Manohar Joshi Friday evening, to seek their blessings before he moved forward to craft a new government.

Indications are that Amit Shah will get a top slot in the new government – either home or defence.

Nitin Gadkari, glum-faced after the polls, might be retained in government but might not get the money-spinning Roads and Highways ministry. Smriti Irani, who trounced Rahul Gandhi in Amethi, will also be given a prominent ministry this time. She was holding the textiles ministry after removal from the HRD ministry. The arrival of Shah in the new government would be an indirect jolt to Gadkari, whose posturings and loaded comments in the past had not been taken kindly to by the PM. Gadkari, like Shah, headed the BJP as its president for a period.

Arun Jaitley is not in good health, and might stay out, though he was a tower of strength for Modi in the first term. Sushma Swaraj had not contested the polls this time, but might return to head the external affairs ministry. Finance ministry might go to Piyush Goel, who was in-charge of the ministry when Jaitley was hospitalised.

Lok Sabha speaker Sumitra Mahajan too has not contested the polls, but she will be at the helm in some way. She might even be picked for the post or President after incumbent leader Ram Nath Kovind’s term ends. Question also arises who would be the next Lok Sabha speaker.

Reports are that both Modi and Shah will sit together and finalise the ministerial line-up. West Bengal, Odisha, Karnataka etc will get better represenation this time in view of the support the BJP got there in the present round of Lok Sabha polls. The YSRC of Andhra Pradesh also is likely to get a slot, besides AIADMK from Tamil Nadu and JDU and the Paswan enterprise in Bihar. The North-East would also be given due representation. There is a question mark over Kerala, where this time too the BJP got no seat. Likely, Alphons Kannanthanam, who lost the polls in Kochi, might be retained.

Meanwhile, there are reports that Tamil Nadu AIADMK leader O Panneerselvam – who was instrumental in messing up the affairs in the party after the demise of J Jayalalithaa, is angling for a berth for his son, Raveendranath who won the Lok Sabha poll for the first time now. He won the seat.
The Congress party held its working committee meet here on Saturday. No hint came out about the future of Rahul Gandhi, as speculations were strong he would quit the party president post in view of two humiliating factors – the disastrous performance of the Congress party at the national level and his own humiliating defeat in Amethi, the pocket borough of the Nehrus for long years.
Notably, Madhya Pradesh chief minister Kamal Nath did not attend the CWC meet, as he is currently on a fire-fighting operation in Bhopal to save his ministry from impending collapse. The Congress alone does not have a majority, and the government is kept alive with support from the BSP and SP as also independents. Nath is paying a heavy price, in material terms, for the continuation of this support. Sensing this, the BJP is bent on trying other means to topple the government.
By all accounts, the Kamal Nath ministry is tottering, and might fall any time now, more so as the BJP has gained moral courage for a toppling game because of the total sweep it made in the Lok Sabha polls in Madhya Pradesh. The BJP won 28 of the 29 LS seats, allowing win in only one seat for the ruling Congress.
In West Bengal too, a revolt in the Trinamool Congress is expected sooner or later. One of the architects of the BJP victory in West Bengal this time, former Mamata associate Mukul Roy, is reportedly trying to pull down the TMC government. Several TMC MLAs are said to planning to jump the TMC ship and side with the BJP.

Mukul’s son Subhrangshu Roy was suspended from the TMC by the party leadership for some of his speeches which helped the BJP’s campaign machinery during the LS poll days. IHN-NN