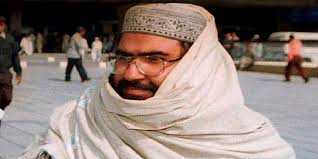 NEWS / MASOOD / UN
UNITED NATIONS: Pakistan-based Jaish-e-Mohammed terror outfit leader and brain behind several terrorist attacks on India, Masood Azhar, was on Wednesday designated by the UN as a global terrorist. The decision to this effect was made after China lifted its technical hold on a Security Council sanctions committee resolution branding Azhar a global terrorist. An official declaration to this effect could follow.
China had stated a day ago that it would re-consider its hold. China had blocked passage of the resolution moved by France, the UK etc a few days after the Pulwama terror attack carried out by terrorists linked to Jaish. The terror outfit, that started its anti-India offensives with the hijacking of a plane during the NDA term headed by Atal Behari Vajpayee in the late 1990s, was believed to be a prop of the Pakistan military intelligence, the Inter-State Intelligence, or ISI.
There was no mention of Pulwama, though France had moved the resolution citing this attack too. Yet, the UN decision is seen as a major diplomatic victory for India, which patiently pursued this cause for years in the face of China’s support for Pakistan at UN. Masood and his Jaish are props of Pakistan’s army through dubious route.

Azhar, notorious for his outbursts and militant training centres run in the guise of charity, with huge fund collections from Islamic nations worldwide for the “cause of Kashmiri Muslims” is currently under the protective custody of the Pakistani authorities. He was detained after the Pulwama attack.

It was on December 24, 1999 that Indian Airlines flight 814 was hijacked by Azhar’s brother and some others of his gang, while it was on a routine flight from Kathmandu to New Delhi. The hijackers demanded the release of Azhar and some other terrorists locked in Indian jails – a demand that was met by the Vajpayee government. A huge ransom was also paid secretly to secure the safe release of the passengers after the plane landed in Kandahar, Afghanistan, which was a hub of the Taleban.
It was a dark hour in the history of India that the plane, which was forcibly landed by the pilot first in Amritsar, managed to take off from there within less than an hour and it headed for Kandahar. Indian agencies messed up the operations to neutralise the hijackers and facilitated the plane’s take off from Amritsar because a relative of then PM Atal Behari Vajpayee’s secretary was among the passengers in the plane. The first priority was to ensure his safety. One passenger had been killed by the terrorists on board the flight, before it finally landed in Dubai from Kandahar.
The huge ransom money – said to be in millions of dollars –or a part of it — formed the base for Masood Azhar’s future terror operations against India. The Modi government has been trying for long at UN to designate Masood Azhar as a global terrorist. India had support from the US and other western nations, but China stood in the way, using even Veto power at Security Council to thwart such an effort.
With the resolution passed at UN, the Pakistan government will now be duty-bound to act against Masood Azhar, 50, and international agencies could/might seek his custody for trial and punishment. Azhar is wanted in India too for the plane hijack and several other terror attack cases.
Masood Azhar, and former Mumbai-based don Dawood Ibrahim, who later found sanctuary in Pakistan, were among those who, with ISI prompting, planned and executed the 2008 Mumbai terror attacks.

Pakistan will need to immediately arrest Masood Azhar, now under detention or protective custody of the government.

Azhar will face an immediate ban on travel — ie, UN member nations cannot allow him in.

The properties of Azhar will need be confiscated by the government. Chances, however, are that he has already shifted ownership of his property to someone else. Pakistan’s government and the ISI would have helped him some way to overcome this situation. Perhaps this was reason why China bought time for Pakistan by seeking a technical hold on France’s resolution against Azhar at UN in February.

Interpol can follow up on the UN designation order, and seek to arrest him.

However, there is pessimism. Lashkar -e Toyba and its leader Hafiz Saeed too had similarly been designated by UN, but nothing much has happened in reining him in. Pakistan provides secret cover for him and the likes of him. All the same, it is worth watching as to what could happen now.


FORMATION OF JAISH E MOHAMMAD
Once released from Indian jail, Azhar returned to his native place in Punjab province and set up the Jaish e Mohammad in 2000.
A year later, Jaish was designated a terrorist organisation by the UN. Pakistan banned it in 2002. Azhar then changed its name and continued with its operations, while the Pakistani military intelligence continued to protect him.
Azhar is now in safe custody of the Pakistani government and ISI, and he keeps shifting his stay from one place to another. He visited the LoC area and stayed there for a brief period, as per information India has.
AZHAR’S PERSONAL BACKGROUND

Masood Azhar hails from Bahawalpur, Punjab province, in Pakistan. His father was headmaster at a government school and was also a cleric linked to the Deoband sect. Azhar too worked as a teacher after graduation in Islamic studies. Azhar’s family also ran a poultry farm.
In 1993, he had travelled to Somalia and got in touch with some Al Qaeda-linked groups. He also travelled to the UK for spreading the message of Jihad.
In 1994, he was arrested and jailed in India. Indian security agencies during a routine road blockade in Anantnag district of Jammu and Kashmir found him getting out of a three-wheeler and running. The cops ran after Azhar and caught hold of him.
During interrogation, they identified him as a Pakistan-based jihadi operating in Kashmir Valley. It was found that he had entered India via Bangladesh and then reached Kashmir. The mess up by the Indian authorities of the plane-hijacking led to the release of Azhar and some other militants from Indian custody.

India has been seeking UN action against Masood Azhar for the past 10 years. China stood in the way even as the US and other Western nations were supportive of India’s cause. The real push to designate Azhar a global terrorist was made after the Modi government came to power at the Centre.

When a resolution was introduced in March 2016, China put a spoke in the form of a “technical hold”, and got its consideration held back until October that year. Then, China again got the hold extended for another term. The matter was taken up at UN again in January 2017 but China again sought its hold for another term. In August that year, again the matter came up, but China blocked it again. Then came another reference in November 2017, and China placed its objection again.

China did the same again in March 2019, when the US, UK and France took up the matter afresh — after the February Pulwama attack on CRPF convoy by Jaish. China finally agreed to lift the hold on May 1, 2019.