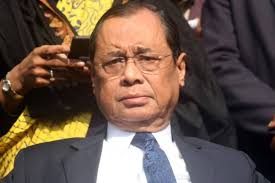 NEWS / RANJAN GOGOI / SEX SLUR
NEW DELHI: Chief Justice of India Ranjan Gogoi is in the eye of a storm. A junior level judicial service staff at the Supreme Court has alleged that the CJI had attempted to sexually abuse her and spoke to her in sexually loaded language, at his official residence on October 10 and 11, she has said in letters addressed to several Supreme Court judges and others. The information was reached to the media as well, with The Wire, Caravan and Scroll taking up the matter with the CJI himself.

In what appears to be a coordinated action, the victim woman  submitted a sworn affidavit before court, and copies of this were sent to over 20 judges of the apex court. The matter became public. Following this, a three-judge bench headed by Justice Gogoi was formed Sunday to go into the matter.

The CJI, who held an urgent sitting at the apex court Saturday, said there was a highly motivated conspiracy against him, as part of which this allegation had now come up. He said this was not the handiwork of only a junior-level staff, but a larger conspiracy was involved. His years in judicial service were never tainted by such allegations, he said, adding that he would not resign his post, and would try rather to unravel the conspiracy.

The way things are happening in the judiciary as also elsewhere, in Delhi and state capitals — the seats of power — a conspiracy angle cannot altogether be dismissed as a figment of imagination. This needs investigation, on the premise that an investigation helps unravel facts. This, thougb, investigations are, more often than not, scuttled at top levels.

The allegation has come as a new embarrassment for the Indian judiciary, which for long years held a big aura in continuation of the status accorded to the judicial system in the British Raj period. However, recent instances of wrong-doing on the part of judges were quite a few, which came out into the public realm.

The crores-for-bail scam, in which some judges of the Hyderabad High Court took bribes of crores for granting bail to a mining baron, had hogged public attention a few years ago.

In another embarrassing case, an intern at the Supreme Court had accused Justice AN Ganguly of sexual demeanor and of soliciting her presence with him at a hotel room in Delhi to study case files of utmost urgency and importance. The issue subsided later, but in a book that Ganguly published, he named her — against existing rule giving protection of identity to women who are sexually slurred.

Several cases of senior level judges indulging in corrupt practices had come up in recent times, though open criticism of judges are not allowed, and can invite prosecution and sentencing.

WHO, THIS JUNIOR ASSISTANT?

The 35-year-old woman had served as a junior court assistant in Justice Gogoi’s court for two years, until October 2018. The alleged sexual advance took place on October 11, 2018, at Justice Gogoi’s office-cum-residence. She says she as also her family was harassed after she refused to cooperate with the CJI. She says she was dismissed from service and at the same time, her husband and a brother-in-law were dismissed from the Delhi Police service. This apart, another brother-in-law who worked as a court assistant was also dismissed. On top of it all, the woman was arrested in a “false” case of bribery and then released on bail.
THE NEW LAWS, THE OVERKILL
Under existing law, the “victim” woman’s name cannot be published: nor can her picture be carried.

The UPA II period, during which time the brutal gang-rape of a para-medic took place, saw the Manmohan Singh government bringing in tough laws to protect women from sexual harassment, making even a stare a jailable offence. This overkill also is creating serious social problems and giving women a free run and policemen a chance to take more of bribes in the name of investigations. The overkill was also such that, under the new law, when a woman accuses a man of sexual misconduct, no proof need be provided. Her word is taken for granted.

The job of the judges is to implement law; and they cannot be blamed if men are given harsh sentences even for minor offences. But, there are times when judges themselves are at the receiving end. Another notable aspect is that the media is in the forefront of India’s moral crusade, but in the end, two highly acclaimed editors — Tarun Tejpal and MJ Akbar — fell in legal traps. All of which goes to say, modern India has a serious problem coming to terms with the new mores in sexual behaviour. Its ageing leadership does not know how to tackle such issues. Instead of giving the right prescription to make life easier for both men and women, immature leaderships often go for the over-kill.

The political leadership, even with their own loose behavioural problems, is playing to the gallery, tightening laws, and is not ready to come to grips with social realities. The result: even a wayward junior staff can spoil a senior’s reputation built over long years of painstaking efforts by making allegations in a whimsical manner.

On the other hand, if those manning the judiciary, exalted as it is, behaves in wrong ways as is now alleged, India has a new problem at hand to tackle. Fact however is that no problem is tackled in an effective manner by those running governments in recent decades. The way  every institution of democracy is taking a hit, by way of corrupt practices and political interferences, the future for India seems bleak.

HOW TO TACKLE THE ISSUE

Fact remains that sex is the main driving force in the modern world. Making a simple advance at a woman, less than a physical attack, should not be made a big issue, and  chould end up with a reprimand, as had been the case in the past. Instead, India today acts like the way those in dark ages like Saudi Arabia tackles things.

The story of Asaram Bapu, a highly revered spiritualist, is before us. He is in jail after allegations came that he raped a young girl in one of his ashrams.

Top US politicians, including George Bush Senior, and not only Bill Clinton, have faced allegations of sexual misconduct. So did an IMF chief — Dominique Staruss Kahn, arraigned in a Manhattan criminal court after a hotel maid accused him of attempted rape in the hotel room. No one, it would appear, is safe from an era in which attempts are more of settling old scores in new ways.

Yet, the junior assistant in the Supreme Court might have a genuine grievance against the CJI. Justice need be done. — IHN-NN