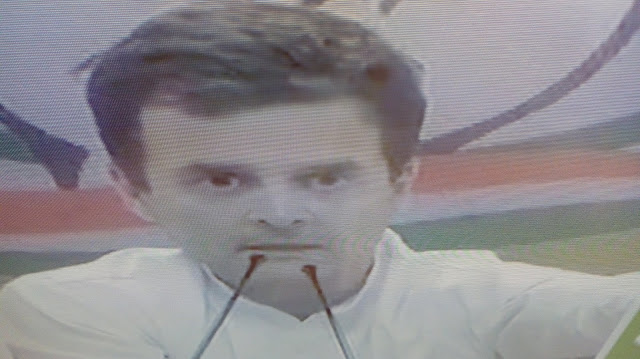 NEWS / RAHUL
NEW DELHI: Congress president Rahul Gandhi on Monday announced his plan to introduce a Minimum Income Scheme (MIS) for the poor families, under which upto Rs 6,000 can be paid to families of 25crore people — or 20 per cent of India’s total population living in abject poverty. This would be given by direct bank transfer, and a family could get a total of Rs 72,000 a year.

This means that if the income of a family is lower than Rs 6,000 a month, the required amount will be given from a government fund to ensure the family got a minimum of Rs 6,000. A family that has an income of, say, Rs 4,000 a month would get the additional Rs 2,000 from the government fund through bank transfer.

The offer is conditional to the Congress party winning power at the Centre in the coming Lok Sabha polls.

This is seen as a counter to the Modi government’s election eve offer of Rs 6000 a year as pension to small and marginal farmers and Rs 2000 a month to the unorganised labour, like vendors, coolies, etc. This announcement had a positive effect on the image-building for the BJP in the run-up to the Lok Sabha polls. The Congress offer now is on a higher scale, and should enthuse poor voters.

Rahul Gandhi arrived at the figure of Rs 6,000 per family per month on the premise that a family would in normal circumstances require a minimum of Rs 12,000 to lead a simple life.

The Congress president was expected to announce his candidature from Wayanad, after the Congress Working Committee meet today, but he said the meeting was continuing for another two days, and he would meet the media to announce other matters on Tuesday and Wednesday.– IHN-NN