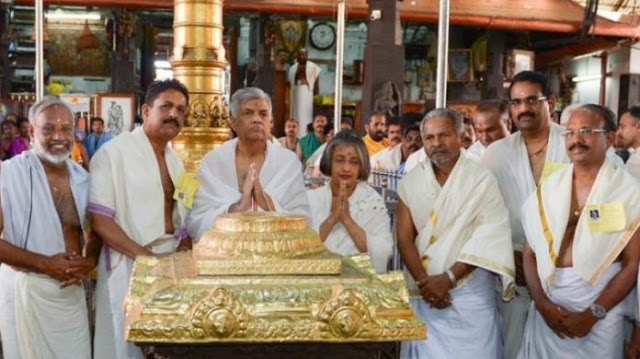 NEWS / LANKA PM
TIRUPATI: Sri Lankan Prime Minister Ranil Wickremesinghe and his wife Maitree offered prayers at the famous hill shrine of Lord Venkateswara at nearby Tirumala on Sunday. On arrival at the ”mahadwaram” (main entrance), the prime minister who leads the island nation’s United National Party and his wife were accorded a traditional welcome by temple priests and top functionaries of the Tirumala Tirupati Devasthanams (TTD.
Before paying obeisance to the presiding deity of Lord Venkateswara at the more than 2,000-year-old shrine, Wickremesinghe performed ”Tulabharam” ritual. It involves the devotee sitting in a balance and offering any material or money equal to their body weight. The same is then taken in as an offering to the God. The entourage later worshipped Lord Venkateswara. They spent about an hour in the temple.
After prayers, Wickremesinghe was honoured with a sacred silk cloth, besides the ”prasadam” and ”theertham” (celestial water) in a tiny bottle, while the priests, amid chanting of vedic hymns, blessed him at the sprawling Rangamandapam in the temple.
Mr Wickremesinghe flew in to the Renigunta airport, 20 km from here, by a special helicopter from Chennai on Saturday evening and drove straight to the Tirumala hills. This is his fourth visit to the ancient shrine, the previous visits being in 2018, 2016 and 2002. IHN-NN