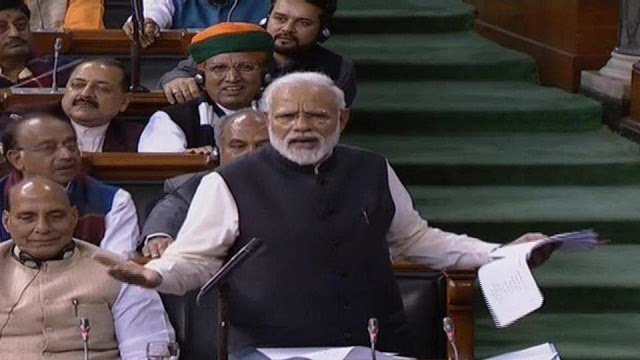 NEWS / MODI
NEW DELHI: In what is seen as Narendra Modi'[s last speech in Parliament before the end of his government’s present five-year term, the Prime Minister targeted the Congress party and its leader Rahul Gandhi, by saying “Thieves are accusing the Chowkidar (himself) of being a thief,” on the issue of corruption. He said every defence deal under the successive Congress governments in the country had a “middle man,” and it was not attacking him for the well-documented and open presence of an Indian firm as the middle man for the Rafale deal.

In his reply to the Motion of Thanks (to the President’s address of Parliament) debate, the Prime Minister said the idea of Mahagathbandhan (grand alliance of the Opposition parties) is a Maha Milavat ( grand adulteration). Modi added that the people are intelligent enough to thwart the attempts by these forces to grab power. He said Indira Gandhi had subverted democracy and dismissed elected governments no less than 50 times.

Modi referred to the dismissal of the Communist government in Kerala by the Congress party in 1959 –when it ruled the state for only two of the five years — and when Nehru was prime minister and his daughter Indira Gandhi the Congress president.

The Congress goverments entered into defence deals by using “Chachas and Mamas (like Quattarochi) as middlemen or agents,” he said.

The Prime Minister also referred to the allegations of how some people linked to the Congress purchased benami properties abroad. He did not name anyone, but attention immediately turned onto Robert Vadra, husband of Priyanka Gandhi, who has appeared before the Enforcement Directorate for a second round of grilling over alleged money laundering and suspected benami real estate deals in the UK though shadowy agents. The questioning of Vadra, started yesterday, took place after a Delhi high court asked the ED to find at the truth behind some related allegations.

Modi also said his government has achieved what was a dream till a few years ago. Rural electrification has been achieved in toto, with 100 per cent success.

“Your (Congress) manifesto said in 2004, 2009 and 2014 the same thing.. .that you would achieve cent per cent electrification in three years. Nothing of the sort has happened under your long years of rule, despite making this promise.”

“You made big promises about housing the poor, and did little. In the last three years, my government provided houses to one crore twenty thousand people, with electricity and cooking gas and other facilities…”

The Prime Minister said his government has been successful in keeping prices of essential commodities under control, which benefited everyone. “There is a direct link between Congress and inflation,” he said.

Also, the prices of medicines have been brought down by his government. “The prices of stents have also come down, he said, and referred to the Ayushman Bharat scheme that his government has rolled out, which would benefit every BPL family with a Rs five lakh insurance per family per year towards medical treatment.

Modi said it was not he who made the call for a Congress-mukht Bharat. Mahatma Gandhi had asked for the dissolution of the Congress party after India achieved Independence, he said, adding he was now implementing that dream. IHN-NN